Historically, the waterfall was discovered in 1140AD, many years after the migration of part of Ife people to the land of Erin Ijesha led by “Akinla”, the granddaughter of Oduduwa (the progenitor of Yoruba race). Erin Ijesha was established as a result of a disagreement that ensued over the person that will be the custodian of an emblem believed to be the god of fertility and procreation, which Oduduwa usually uses to pray for his children. The argument was due to Oduduwa’s old age. The migrants had settled there for years without an awareness of the waterfall. One day, the hunters went out to hunt and they discovered the existence of the waterfall. They were scared and ran back to inform their leader (Yeye Akinla) about the mystery. When Erin Ijesha waterfall was first discovered, its appearance was like a mysterious figure that scared people away for fear of being swallowed up. The figure was believed to be a very tall and huge spirit whose height reached the high heaven. The inhabitants coined the name “Olumirin” from “Oluwa miran”, believing it to be a god whose power was only the same as “Akinla”, the founder of Erin Ijesha. This belief changed later when another oracle was consulted and they were told that it was one of God’s handiwork.

The Source of the Waterfalls

Erin-Ijesa is blessed with beautiful landscape with projecting hills within the range of 1,200 to 1,300 feet above sea level. The area is well-drained by two major rivers, the Oni and the Olumirin among several other seasonal streams and brooks. A cliff is formed along the course of the Olumirin river creating a waterfall which is a major tourist attraction for many people all over Nigeria and the world in general. Olumirin waterfalls have placed Erin-Ijesa on a roadmap of development. The waterfall is one of the most important tourist centres in Osun State. The epithet of Osun State “Land of the Living Spring” is derived from the waterfalls at Erin-Ijesa and Osun River grove in Osogbo. 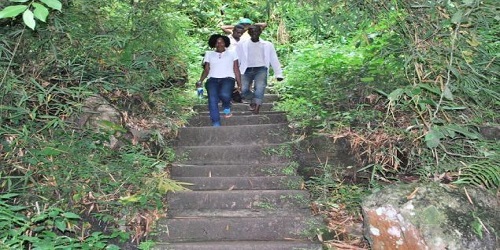 Just close to the entrance of the tourist area is a water-pouring pot that signifies the source of the waterfall. One has to go through a little exercise of climbing and descending the stair way as one moves through the enveloping rocks to reach the waterfall. The lapping sound of the spring could be noticed and heard as one strolls to the waterfall. Climbing the rocks to discover the waterfalls is thrilling. The path leading to the place is scary because of the rough steps leading to the first and second level of the waterfalls. The waterfall is a real beauty to behold with its cool and refreshing breeze. The water is clear, cold and refreshing, serving as drinkable water and medicine for indigenes and tourists. According to history, the water has the ability to heal many ailments depending on the faith of the person using it. The waterfall is an assemblage of seven levels with each level presenting a distinct outlook that is different from the previous level. It is like a collection of seven cascades which pour over a cliff, thus creating an impressive seven-part waterfalls.

Climbing the rock is quite daunting for climbers but definitely exciting. Broken pieces of rock serves as a stepping stone by which tourists climb each waterfall. Each level of waterfall is surrounded by towering mountains giving tourists a sense of tranquility with streams flowing majestically and splashing down with great thundering sound on the vegetation around.

View of the Waterfalls

The first level of waterfall rose through a narrow opening in between a cluster of luxuriant tree trunks covered with dark green leaf down a double folded rock steep of about 10 meters high. The second level is the most gigantic with water flowing down a 40 meters high cliff. The stream channel gives a new outlook during the rainy season especially when it has reached its flooding level. The stream forms a shallow surrounding pool for tourists who are brave enough to reach the second waterfall. As one goes further to climb the waterfall. It becomes more laborious but adventurous because of the nature of the next levels. There are no steps to climb except surface depression and projections, roots and branches of trees. There is need for determination to go through the next levels. The third level looks fabulous. It is so calm and refreshing coupled with the coolness of the streams. The peak of the waterfall which is the seventh level has a flat rocky surface area, mostly filled with huge trees. There are different kinds of edible fruits there including oranges, pineapples and so on. At this level, one has the opportunity to see the source of the waterfall. The water gushes out like a pump from a pot-like shaped rock. The seventh level also hosts a small settlement which attracts tourists that are able to reach the seventh level. The settlement links with another town called Efon Alaaye and their main occupation is farming and they specialize in cultivating food crops and cash crops. The settlement is named “Abake” coined from “Aba oke” meaning settlement on the rock. It consists of mud houses. Their women engage in cassava (gari) processing using the traditional method. Although, the small community suffers from lack of inaccessible road, they are still very hospitable and happy whenever they notice that tourists climb the last level of waterfall to see their remote area. Erin-Ijesha waterfalls offers everything the tourist needs to satisfy his/her hunger. From freedom to beauty; refreshment to peace, adventure to excitement, happiness to safety… and of course, inspiration to goodness.

In conclusion, it is okay to say that a visit to Erin-Ijesha waterfalls is a visit to the embracing sweetness of nature.

TOP ESTATES IN LAGOS An estate is a group of homes and other buildings built as a single development, it is...

ERIN-IJESHA WATERFALL   Erin Ijesha Waterfall is one of the greatest gifts of nature in the world whic...